“Bone Song” is the opening to a trilogy set in Tristopolis, a city powered by the tortured bones of the dead, powered by oppressed spirits, its night-time streets patrolled by deathwolves and predators both animal and human, alive and dead.  Policing these streets is Donal Riordan, a good cop in a dark town, charged with bringing down a conspiracy to steal the bones of prematurely-deceased artists.  A conspiracy that extends from the lowest depths of the power generators to the highest echelons of society. 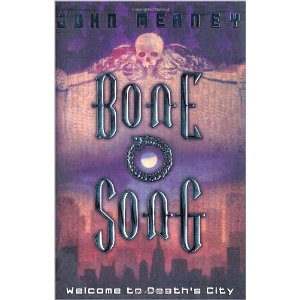 The novel is an intriguing clash of genres; sf and horror clinging to a scaffolding of what is, at heart, hard-boiled detective noir.  And it doesn’t get much more noir than this, a city of gloomy purple skies, powered by death, where every building hides a wraith, and even Riordan’s love interest is a zombie.  Meaney neatly sidesteps any paranormal romance clichés to deliver a story that is darker, far more unsettling, and ultimately tragic.

The danger with such a cross genre novel is that it runs the risk of falling between two stools, and alienating the detective fans who can’t stomach the horror.  It’s fair to say that some of the more gruesome elements of “Bone Song” means it won’t be to everyone’s taste, but anyone who likes their thrillers with a substantial shot of horror (or vice versa) will find this a highly entertaining and original read.

The sequel “Dark Blood” is available from Amazon, and John Meaney will be one of the Guests of Honour at BristolCon ’12 in October – more information at http://www.bristolcon.org/