“Archangel Protocol”, the first volume of the ANGEL-LINK series, was originally published by Penguin USA way back at the turn of the millennium, which feels like a different world looking back on it.  The book has been revived by Wizards Tower and is published here from the first time in all its anachronistic glory, an e-book dealing with future tech written before e-books were available.

Morehouse has resisted the temptation to fiddle with it in the light of what we know now, and it’s a stronger book for not being messed with.  Some of her predictions are eerily prescient, others are way off, all are well thought out and thought-provoking. 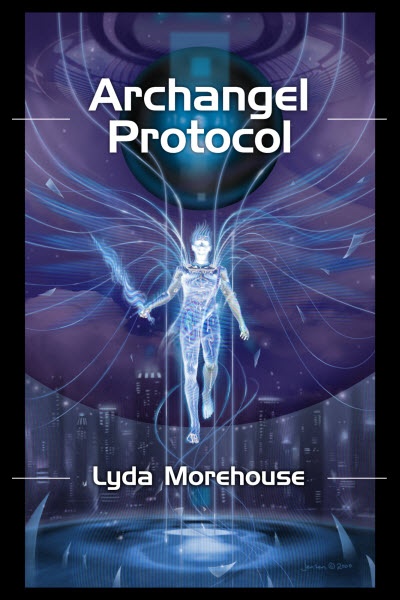 In the America of the then-future, everyone is attached to the LINK – essentially an interactive, holographic version of the internet.  In a nation dominated by the religious right, Angels have arisen in the LINK, but no one is sure if they are divine manifest, corrupt programming, or something in between.

Dedrie McManus, disgraced former NY cop, doesn’t believe in angels. Until she falls in love with one, and the battle for the Presidency becomes a battle for the very soul of America…

Conflicted Dedrie is a wonderful character, lending a human face to the high-tech world inhabited by the LINK-angels and the mysterious, lovable, infuriating Mouse, who has his own agenda.  Morehouse’s descriptions of a New York turned to glass by the effects of a Medusa Bomb are chilling in their simplicity, reminiscent of J G Ballard’s “Crystal World.”

It’s an entertaining, thoughtful blend of SF and religion.  I believe Wizard’s Tower have plans to release the rest of the series, and I’m looking forward to discovering them.