“Fallen Host” is the sequel to Morehouse’s “Archangel Protocol”, and set just a short time after the dramatic conclusion of the first novel. The books were originally published by Penguin USA in the early noughties, and have been re-published by Cheryl Morgan at Wizard’s Tower and given a new lease of life. As a result some of the technology in the books feels strangely anachronistic, some feels prescient, and some doesn’t feel like SF at all, something worth bearing in mind when reading the books.

The story is split into three first person viewpoints – Morningstar, the Adversary, hunting a new Antichrist for the final battle; Emmaline McNaughten, papal Inquisitor and cyborg, charged with deciding whether artifical intelligences have a soul; and Page, son of Mouse, an AI roaming the Link, abandoned since his father Mouse has been imprisoned for creating the LINK-Angels and fooling the world. Imprisoned because he was betrayed, by Page, who is seeking some kind of redemption.  Their intersecting stories are brought together by Mai, cellist in a popular Japanese thrash-polka band, who may or may not be what all three of the viewpoint characters are looking for. 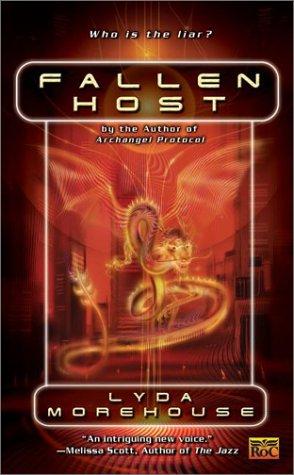 Once again, it’s Page and, by extension, Mouse, who are the most sympathetic characters, Page and the Dragon of the East, both Artificial Intelligences, display more humanity than most of the real-life humans around them, and certainly more that the rather obnoxious and self-obsessed angels (actual angels, not Link Angels). Morningstar is as arrogant as history suggests, and his relationship with Emmaline is slightly unconvincing, as was Dedrie’s with Michael in the first book. There seems no reason why otherwise smart, independent, career-minded women should want to leap into bed with the angels as soon as they see them – if it’s some kind of heavenly compulsion that’s not made clear in the books, and to see the steely Inquisitor and the hard-nosed cop simpering like teenagers over their muscular objects of desire is a little unconvincing – the Dragon’s love for Page has more depth and investment than the bedroom interactions between human and human-shaped characters.

Having said that, the romance is the only spot where the book falls down. The SF elements are fun, as is the gentle criticism of organised religion. Morehouse takes complicated ideas about the nature of what it is to have a soul, and to be human (a very Dickian plotline) and condenses them into a chase through real space and cyberspace, culminating in a finale, in Mecca, that manages to be simultaneously tragic and uplifting. It may tie up some loose ends, but it leaves the gate wide open for a conclusion to the series that promises to be both dramatic and explosive.