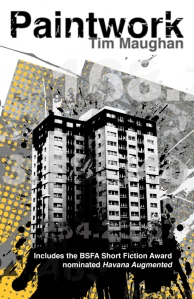 “Paintwork” is a slender collection of three short stories by Bristol SF writer Tim Maughan. The collection includes the BSFA Award nominated “Havana Augmented”, the title story, and “Paparazzi”, and all three stories are loosely linked, crossover references and characters showing that they are part of the same near-future hi-tech cyber-world.

In “Paintwork”, Bristol graffiti artist 3Cube uses QR codes to subvert advertising and create his own art, only to find it sabotaged by a mysterious rival using far more old-fashioned methods. Anyone who has spent any time in Bristol or has an interest in street art will know that the city is a mecca for graffiti artists and spray-can warriors, and the story makes good use of the cityscape off the beaten track. 3Cube himself cuts an affable, optimistic figure in his outsized Adidas and his too-small custom Nikes, a little guy trying to make a name for himself by striking a blow against the system, only to find his work subverted and betrayed.

A short film was recently made to accompany “Paintwork” – Tim talks about it more on his blog and you can watch it here :

In “Paparazzi”, out-of-fashion documentary maker John Smith is recruited by a powerful gaming guild operating in popular MMORPG A Wind of Blades  to spy on and damage the reputation of Leo Kim, a celebrity player in a rival guild. Augmented reality, the grey area between the real and the virtual, is a theme that links all these stories, from 3Cube’s hyper-real billboards to the playground of the Havana streets, and to the lush jungles and temples of A Wind of Blades, a gaming environment that becomes, at least for John, a little too real.

Leo Kim turns up again in BSFA Short Fiction Award nominated short “Havana Augmented”. Paul is a gamer, and with his hacker friend Marcus has created an augmented reality video game, where giant virtual robots battle on the real playing field of the city streets. But when the Guilds start to take an interest and send a team of their own, headed by Kim, to Cuba to take on Paul and Marcus, suddenly it becomes much more than just a game. Maughan draws subtle parallels between the barrios of Havana and the grinding poverty of the estates of inner-city Bristol, and the pride in their home town, even in the face of this desperation, shown by both 3Cube with his spraycans, painting meadows and sunlight over the tower blocks of Barton Hill, and Marcus and Paul, fighting for the honour of their city.

It’s a strong debut collection, influenced by cyberpunk, crammed with near-future technology, but with a warm human core. By the very nature of near-future SF, these stories will probably feel pretty dated in five years time, so grab a copy now while they’re still fresh.