Launch Day for “Art of Forgetting : Rider” has dawned kind of muggy, and Lyra celebrated by toilet-papering the landing, the mad little badger. And then making a face like this : 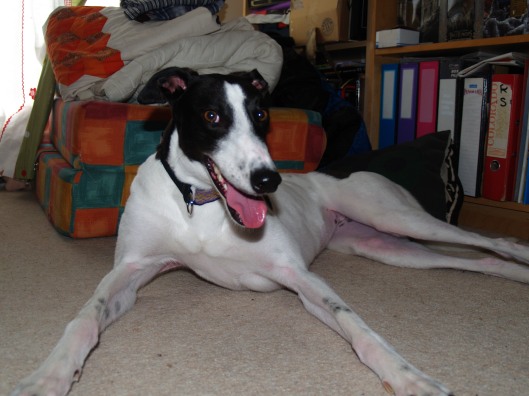 Although it’s not OFFICIALLY out until Sunday, you can get an early copy of the book exclusively from Forbidden Planet in Bristol from 6pm tonight – erk! Des has assured me there will be cookies and there will be freebies in the shape of bookmarks – there are quite a few people who have promised to turn up so it should be good fun!

Got butterflies already though… :S

Yesterday I was a guest on Ujima Radio Women’s Outlook show, being interviewed by Cheryl Morgan, who asked me about the book, about the small amount of magic, the way the book subverts some classic fantasy tropes, and the decision to include characters of diverse sexualities. It’s relatively spoiler free – we tried to keep it that way as much as we could, but as Cheryl said it’s  hard because there are several major game-changing plot twists and what Chris refered to as a “staggering double-bluff” (because he’s sweet).

If you’d like to listen to it the interview is here and goes on for about half an hour :

And Cheryl blogs about it here :

I also have a new interview up on the Kristell Ink website (all over the Web today!) where I wave my geek flag high and manage to quote Zombieland, The Princess Bride and Galaxy Quest in the space of about five paragraphs. I got to ask Sam a question too!

And a bottle of CHAMPAGNE and two flutes has just arrived from my editor, Robert, which was most unexpected and very welcome – free alcohol is an unexpected perk!