DISCLAIMER – THIS BOOK IS PUBLISHED BY MY PUBLISHER. THIS IS A FAIR AND HONEST REVIEW. IT ALSO CONTAINS SPOILERS.

“Guardians of Evion : Destiny” is the first volume in a projected trilogy of fantasy / sf crossover novels from Norwegian author and artist Evelinn Enoksen (who was also responsible for the cover art for “The Art of Forgetting” – isn’t it annoying when people are multi-talented? 😉 ) Evelinn’s own artwork is included throughout the book, and she was also responsible for drawing the maps at the end. 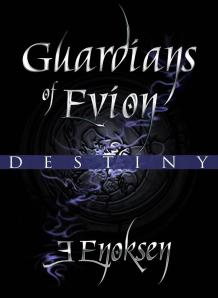 Numak is chosen to be a rider at Tarei Waystation following the mysterious death of his twin sister Fron. He arrives full of big dreams about following his destiny to become a dragon rider, only to find that nothing at Tarei is what it seems. His sister is not dead, but vanished, leaving behind a scene of bloody murder. Numak is dragged into a dangerous game of Cast politics when he rescues Nella, the daughter of the Cast Alyth, or leader, from a suicide attempt. But the stakes are higher than he, or anyone, realises, as a mysterious star approaches Evion and releases a menace from the sky…

Hang on a minute. So far, so Anne McCaffrey, you’re thinking, and you’d be right. There’s more than a whiff of Pern about Evion, a colonised former mining planet whose three moons make for a disruptive and dangerous environment, with its telepathic dragon riders, its mysterious star that turns out to be a space ship, and its complex hierarchical society. But the author is not so much in thrall to the Lady of Dragons that she doesn’t make it her own story. There’s a lot of complicated back story here, and a considerable amount of thought has gone into the world building. Sadly, while the world building is excellent, some of the main characters, particularly Numak, seem a little flat. Our hero is a bit *whisper* dull, especially in comparison to the supporting cast. It took a long time for me to feel sympathetic towards him, and I found his dragon-incited rape of Nella problematic. This is a particular issue as Numak is firmly at the heart of the story, especially in the closing stages. Unfortunately he’s so much less interesting and engaging than many of the supporting cast, particularly dragon rider Ethrin, her long-term undeclared love, Tarei Cast Alyth Talek (Nella’s father), and the spectacularly evil and manipulative telepath Ilya, who is a brilliant character and must have been so much fun to write! But it’s not from Ilya that the greatest danger to Evion comes, but from someone Numak mistakenly thinks he can trust.

Despite my initial misgivings about Numak, he had grown on me by the end of the book, and though some of the best character interactions and most poignant moments were delivered by characters who sadly didn’t survive to the final pages, I did find myself wanting to follow Numak and his dragon Anwrath on their continuing journey. I hope that in future books Evelinn Enoksen will be able to step further away from the looming shadow of Anne McCaffrey and continue to make this fascinating world her own.