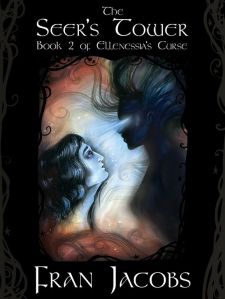 The second volume in the slow-burning “Ellenessia’s Curse” trilogy ends, as it begins, with a death, and a death that Prince Candale feels responsible for. He is mired in the blood of the witch Mayrila, his real mother, and his life is spiralling helplessly out of control. As the prophet of the demon Ellenessia, he is commanded by her to travel to the Seer’s Tower in magic-hating Idryan, to prove that she exists to the world. But how can he do her bidding when he is confined within the walls of Carnia Castle by a family who have turned against him, with the threat of being sent to an asylum hanging over his head if he puts a foot wrong? Because, let’s face it, this is Dale, and he’s bound to trip over his own feet sooner rather than later…

Jacobs does an excellent job of portraying Dale’s frustration and helplessness in the face of his well-meaning family and the cold, sinister doctor sent to “help” him. Dale is still a an infuriating but essentially loveable character, a wide-eyed naif who does crashingly stupid things but has the best of intentions, who loves his friends but frequently leads them into danger through his reckless or ill-thought out actions. He has shown slight signs of growing up since the first volume, and we can only hope that by the end of the third volume (release date TBA – Jacobs is a slow writer and is currently working on other projects) he will finally grow into maturity.

The first half of the book proceeds at a leisurely pace, taking in Dale’s struggles at home and his journey to the Seer’s Tower with his faithful, long-suffering companions, Trellany the bodyguard, Silver the mage and his two sisters, and Tev, the bard who carries a flame in his heart that everyone but Dale can see. The section at the tower is fascinating, and over too briefly; I would have liked to linger there for longer and discover more about it, and then the pace picks up for the final third of the book when Dale is kidnapped and separated from the friends he loves, forced to come into his own and find his own bearings.

The ending is dramatic, violent, and unexpected, and leaves Dale more alone than ever. How will he cope? And will we ever find out?