“It is a truth universally acknowledged, that a fantasy writer in possession of a good fortune, must be in want of a cat.” As Jane Austen probably never said as she delicately collected the remains of a disembowelled mouse from her parlour carpet.

And she probably wasn’t nearly as annoyed as this poor medieval scribe whose cat decided to vexe hym most wrothly… : 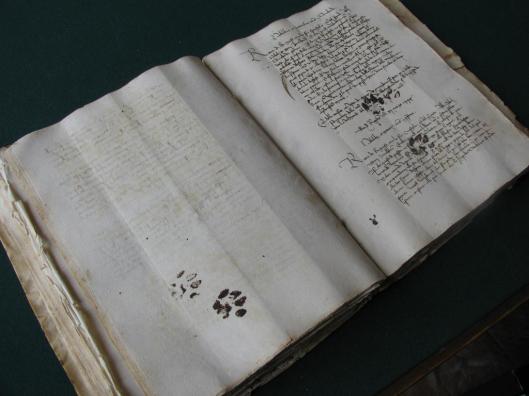 Cats and writers go back a long way. Cats and stories go back even further. So it’s appropriate that the first book launched on Grimbold Books new subsidiary Kristell Inklings should be a collection of cat-themed flash fiction, with the submissions drawn from an international competition held late last year. There are all kinds of cats curled up within the pages of this slim volume, ghost cats (“The Best and Last Hiss”), steampunk cats (“Punky” “The Clockwork Cat Escapes”), witches familiars (“Catatonic” “No Tears”), and the inter-dimensional time-and-space travelling cats who, secretly or not-so-secretly, rule the universe – if you are owned by one of these cats you’ll know exactly what I’m talking about.

Highlights included the heroic spacefaring McKenzie of David Cohen’s “Pest Control”, who saves her shipmates from a fatal decompression, “The Cat Mirror” by Rob Bayliss, a steampunk tale which features one of our secret masters who must protect his identity, and the opener to this collection, A F E Smith’s “Nein Lives”, which was a worthy winner of the competition and tells the story of a seemingly innocent cat’s influence on some of the greatest scientific minds in history.

Being flash fiction, all the stories here are served in handy bite-size chunks, with none of them longer than about three pages, and each story is accompanied by its own charming illustration. Short story collections, like life according to Forrest Gump, are like a box of chocolates – you never know what you’re going to get, but this is a lovely collection, poignant and funny by turns, and it showcases some very good up-and-coming writers. Let’s just hope they can keep those pesky ink-stained paws off their future manuscripts!