THE RELUCTANT PROPHET by GILLIAN O’ROURKE 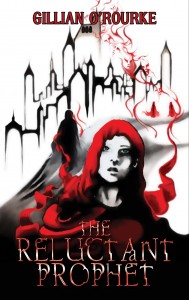 Gillian O’Rourke’s debut novel follows the story of Esther, who runs away from home at the age of twelve to follow her religious calling and to escape from her drunken, abusive father. She becomes a Priestess of the Order, a follower of the three Gods, and she hopes she can use her rare talent as a seer to help people, enduring trial after trial in the name of her faith. But the Gods are capricious, and cruel. They have their own plans for Esther, who is betrayed by both the seniors in her order, and by her inability to see her own fate.

Esther lives in a harsh world, and it seems the world and its malevolent gods are out to get her. Her gift is both a blessing and a curse, especially when it shows her divergent futures, and reveals that the future of the world hinges on the terrible choices she must make. Gillian O’Rourke’s gift is that she really makes us feel for Esther, swamped beneath a relentless barrage of suffering, unable to escape her god-dictated fate no matter how she twists and turns. Yet still she remains strong in spirit and good of heart, under punishments that would have broken many characters, and the reader is rooting for her on every step of her difficult journey.

The book deals with some serious themes; religious oppression, class conflict, and the corruption brought about by the all-consuming desire for power, in the form of cold-hearted Superior Mirren and her guardian, the bully Placida, who look down on Esther as a peasant and seek to use her unique gifts to further both their own ambitions and those of the callous trio of Goddesses. How Esther rises about their machinations to find some sort of peace and freedom, even at the cost of a great sacrifice she must make, is to be celebrated. Much of the theme deals with the conflicts brought about by having both free will, and the ability to see where that free will can lead – in this case to war and heartbreak if Esther doesn’t make the most difficult choice of her life.