ANY OTHER NAME – SPLIT WORLDS VOL 2 by EMMA NEWMAN

Please be aware this review contains spoilers for both “Any Other Name” and “Between Two Thorns”. 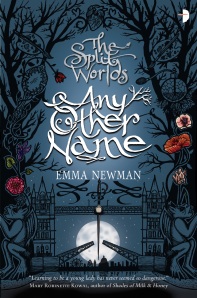 “Any Other Name” is the direct sequel to the delightful “Between Two Thorns” and it picks up where that book left off, with heroine Cathy looking down the barrel of an unwanted marriage to William Reticula-Iris, while Max and the gargoyle investigate the massacre of the Bath Chapter of Arbiters, whose hearts have been turned to stone in their chests by an unfamiliar and powerful magic.

Cathy discovers that she has escaped the clutches of her own family, the Rhoeas-Papavers, only to fall into the clutches of the Iris, who are possibly even more cruel and calculating. How can she carry out her tasks for former Patron Lord Poppy and escape into Mundanus and back to the life she longs for when a Charm placed upon her on her wedding day restricts her contact with any man who isn’t her husband? Dame Iris, the second wife of the Iris family Patroon, is merely unbearable, but Lord Iris himself is the very embodiment of sinister, and he has plans for Cathy that neither she or her former patron Lord Poppy will be able to fight against.

Meanwhile, Mundane Sam is losing his wife to sinister forces who have the power of the Elemental Court behind them, and not even Lord Iron’s protection is going to be enough to help him this time. When the Elemental Court start interfering in the affairs of both Mundanus and the Nether it could spell disaster for the Split Worlds and everybody in them…

Tea and cake are the cornerstones of the Split Worlds, as is only right and proper. The books have a sensibility that make them very lovably English, even now the action has moved from genteel Aquae Sulis to the more cosmopolitan Londinium, but they also have an inner core of steel. This is exemplified in Cathy, whose feminist way of thinking clashes at every stage with the oppressive patriarchy of Nether Society. What I really loved about Cathy, aside from her passion, was her ability to grow and change, to accept that she wasn’t the only one feeling this way, and her willingness to sacrifice a degree of her own happiness to stand up for her sisters in Society as it dawns on her that they might just feel as uncomfortable with their proscribed roles as she does. It will be interesting to see how she takes up that fight.

Max and the Gargoyle, and to some extent Sam, take a back seat to Will and Cathy’s struggles in this second volume, and that’s a shame as I wanted to see more of them and find out how their strange, strained relationship progresses. As for Will, it’s good to see a conflicted hero, who sometimes does sinister things for what he thinks are the best reasons. By the end of the novel he has been manipulated into doing something truly terrible, and while he is unaware of the manipulation, he can see that the consequences of his actions will result in yet more blood being spilt amongst the Great Families.

The book ends on a breath-snatching cliffhanger that leaves the reader grasping eagerly for the next volume, and wondering how this terrible situation is ever going to be resolved. It’s going to take more than tea and cake to solve this one.