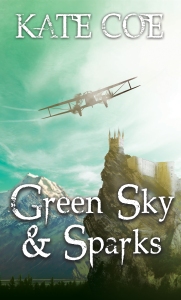 Green Sky and Sparks is the first in a series of TEN projected novellas by Swindon author Kate Coe, all taking place in a world where magic collides with electricity, or “spark”, where mages build flying machines and storms dominate the green-hued heavens.

In this debut installment, Archivist Catter Jek is offered the opportunity to explore a myth, a secret hidden deep in the mountains that loom above the city of Meton. At his side is Toru, Lord Heir of Meton, whose adventurous spirit chafes against the restrictions his position places on him. But when Toru rescues a dying Healer from a rock fall that has killed her partner, a magical bond is formed between them that has an effect on all three lives, and none of the trio will ever be the same.

Kate Coe has obviously put a great deal of thought into her well-crafted world and rounded characters, fleshing out each individual, even the minor characters, and layering the story with subtext and hints towards a much wider story outside the slender confines of this poignant, touching novella. It’s going to be fascinating to see how things pan out across future volumes, as this is only the beginning of a far more ambitious project. Buy it now and get in right at the beginning of the journey.

Grey Stone and Steel, the sequel to Green Sky and Sparks, will be released by Kristell Ink on December 1st 2015 and will be available exclusively from Amazon for the first three months – pre-order your copy of Grey Stone & Steel

Toru Idalin, the Lord Heir, has a problem. The man he loves has accidentally made Toru into a powerful Mage, and Toru caused a soulbond between himself and a grieving Healer. Now Catter has left, unable to deal with Toru’s connection to S’ian. But when Quorl is attacked by an enemy intent on gaining the secret of newfound flight and electricity, the ripples from Catter’s actions become even more important, and Toru is thrown into the struggle to defend both his land and his partner.