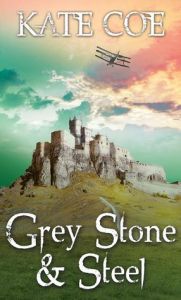 Grey Stone and Steel takes up the ongoing story of Toru and his accidental partner, S’ian, where previous novella Green Sky & Sparks

left off. Toru’s lover Catter has left, unable to deal with the soulbond between S’ian and Toru, and now S’ian takes centre stage. She is sent to Aleric, a city under siege by Ziricon, an enemy nation intent on stealing the newly-discovered secrets of flight and “spark”, or electricity. Taking one of Toru’s Gliders to use as a reconnaissance craft, she is thrown into the midst of the battle. But her nascent mage powers and her unwanted soulbond to Toru cause suspicion amongst the people who are supposed to be her new allies.

Kate Coe packs a lot into this slim volume, moving the story that flashes between S’ian and Toru along at a swift pace, never letting the tension drop. It’s clear that events are moving in the world outside the confines of this story. This is the second volume in a projected series of ten, and there’s a definite sense of pieces being pushed around the board, setting up future conflict and tensions, but Grey Stone and Steel also stands alone as a slice of life in a city under attack, and S’ian is a sympathetic protagonist, struggling with both her bond with Toru and her own grief for a lost lover even as she throws herself into the defence of the city.

The book ends on a cliffhanger, with a dramatic glider crash and a new threat from the sea. It’s anyone’s guess where the story will go next, but I know I’m strapped in for the whole journey….