A TIDING OF MAGPIES by PETER SUTTON

Buy A Tiding of Magpies on Amazon

“There are many rhymes about magpies, but none of them is very reliable because they are not the ones that the magpies know themselves.” – Terry Pratchett 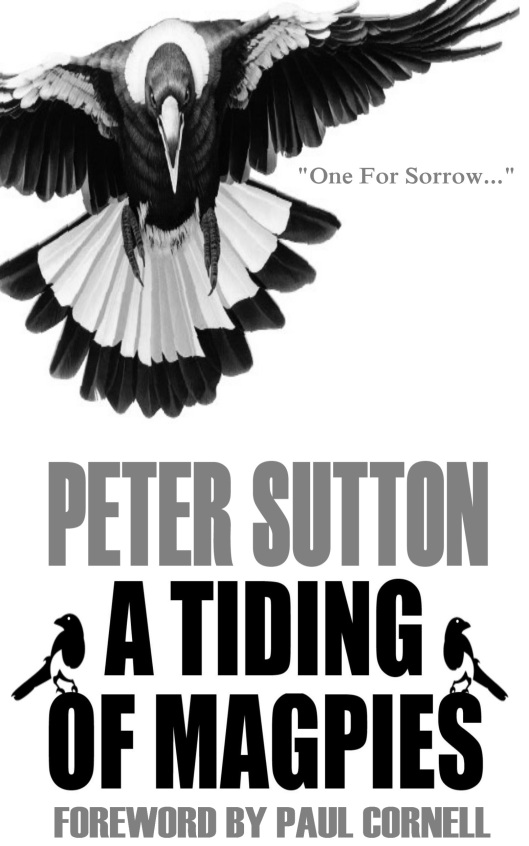 There are many rhymes about magpies, and it’s the original, lesser known version of the “One for Sorrow” rhyme that forms the basis of the bulk of this collection by Bristol author Pete Sutton from new-ish publishers Kensington Gore. I’ve been lucky enough to hear or have read a number of stories in this collection before it was published, but Pete is a fine writer and it was great to be able to go back and revisit the stories, particularly the ones I had only previously heard read aloud.

The collection takes in the full scope of speculative fiction, from fairy tales (“Swan, Wild”, the story of a prince cursed with a swan’s wing and his quest for revenge) to horror (the dark secret in the attic in closing story “Latitude”, and shock opener “Roadkill”), to pure SF (“The Soft Spiral of a Collapsing Orbit”). The stories range in length; some are flash fiction, but I found the longer stories worked better to convey the many ideas the author is trying to put across – Pete Sutton is a charismatic and complicated writer, and I’m looking forward to seeing what he does with a novel.

Highlights for me – “Sailing Beneath the City”, which was a new one for me, a fantasy of a lost soul who consumes his own memories because they are too painful to bear, and which felt like it could and should be part of a much larger world that I wanted to explore. The previously mentioned and deliciously creepy-twisty “Latitude”, which previously appeared in North by Southwest, and “Thunder and Magpies”, a revenge story that doesn’t lose any impact from repeated telling.

One small note of frustration, there were a number of small but irritating errors in punctuation and odd formatting errors like random changes of font in the contents page, so perhaps the publishers need to look into fixing that for future editions of the book. That was annoying, but it didn’t spoil my enjoyment of the book particularly. Recommended for those who like their stories to be a bit more than just black and white…