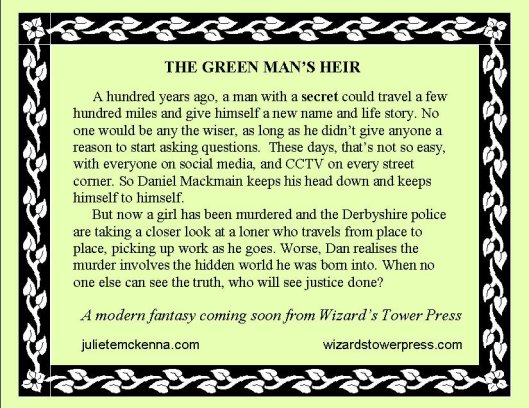 A new book (in this case the potential opener to a new series) by Juliet McKenna is always a welcome prospect. Juliet is one of the UK’s finest fantasy writers and why her work isn’t lauded alongside that of, say, Robin Hobb, is a constant mystery to me.

The Green Man’s Heir is a contemporary fantasy set in and around England’s Peak District, and the titular heir, Daniel Mackmain, is making his living as a builder and wood-carver, and trying to find his way in a world in which he feels slightly ill-fitted. Mackmain is the son of a Dryad and a human father, and his heritage allows him to see and experience things other people can’t. So when he stumbles across the scene of a murder and finds that a local dryad is passionately observing events, he is drawn into an investigation that will see him take on more than one supernatural entity as he finds out more about his mother’s people and his own heritage.

Daniel is an affable sort, and his awkwardness, his feeling of not quite fitting in with the modern world due to both his heritage and his upbringing, makes him engaging if not always likeable. Burdened by the secret of his mother’s race, he has found himself unable to form close relationships as he moves from place to place, unsettled, always on the look out for another Dryad’s son who might understand him. He is a child of two worlds, yet fully accepted in neither, too human for the dryads and the potentially malevolent naiad he meets, too closed in to maintain his relationship with semi-girlfriend Victoria.

Juliet McKenna captures the nuances of life as a stranger in a small town in much the same way as Paul Cornell does in his splendid Lychford series, with the local gossips, the hard-pressed police, the rampaging boggarts and rural legends come to disturbing life. Thoroughly enjoyable; a UK fantasy author branching out (oh god, sorry for the inadvertent and terrible pun!) and clearly having a great time doing it. Highly recommended.