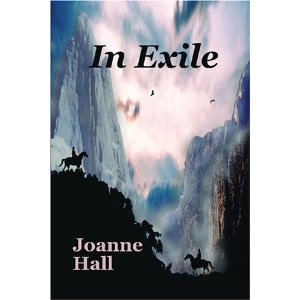 place called Mouse On The Table. Shen, as she is now called, can hold her own against the scraggly likes of the tavern patrons, but what weighs most heavily on her mind is the husband she lost and the son she has not seen since that dark night she headed into an unknown future.

Shen’s cousin, Meganne and her husband, Jorge, and a fellow worker named Callum, who are intimately familiar with the goings on in her life, help her make it through the rough times. Their love and friendship, though, are never quite enough to ease her grief or calm her nightmares.

King Valery, who has now taken the throne at Hierath Castle by treacherous means from King Alex, is continuing his search for Rhodri, Alex’s son and rightful heir to the throne. Valery knows he must eliminate this threat if he is ever to have absolute control in his kingdom. Valery is not above selling his soul to get what he wants.

In Exile, the 2nd book in the “New Kingdom Trilogy,” is excellent. The story is fluid and moves quickly, but at the same time Ms. Hall does a nice job of allowing you insight into the characters. The character development and the story line are consistent throughout so you don’t have to backtrack to figure out what is going on from the first book to this one. Ms. Hall’s progression as a writer is ever apparent in this book.

I, for one, am looking forward to reading the last book in the Trilogy to see exactly what happens. –Gracie Lightfoot, Y-30 Staff

In Exile was a 2008 Pluto Award Finallist.

In Exile by Joanne Hall

Volume 2 of the Hierath Saga

Owing more to Fritz Leiber’s Lankhmar than to  Tolkein’s Lord of the Rings, the sequel to the EPPIE-Award nominated Hierath is  more assured than its predecessor.

Joanne Hall made a dazzling debut in 2006 with the story of two young men and the woman they rescue from drowning with the epic sword & sorcery fantasy Hierath.

One of the young men –King Alex– fell in love with and subsequently married Lydia, the girl, only to be betrayed and his regime overthrown by his childhood friend Valery.

Now in exile, a young barmaid encounters the men of the Wolfpack, Valery’s feared
death-squad. Shen the barmaid is then grabbed on her way through an alleyway, but her ‘assailant’ is Bale, King Alex’s trusted lieutenant.

Back at her rooms it emerges that Shen is Lydia, hiding from the Wolfpack; Bale tells her that Alex is alive, and she agrees to ride north with them to rendezvous with her husband. Her cousin Meganne and Meganne’s husband Jorge insist on accompanying her to the meeting. 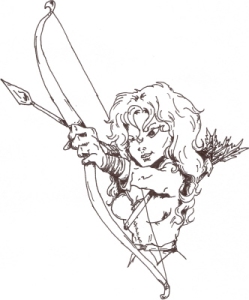 Meganne, as drawn by Melissa Berberian

This had one unfortunate consequence; one or two riders on their own are far less than a group of four particularly when two of the group are strikingly beautiful women
– and Meganne has ‘the glamour’ the ability to bewitch men, which she seems to be hardly aware of, but which makes her hard to forget by those she’s used it on.

When they meet with Alex, the group grows to five, and their progress becomes even harder to disguise. They narrowly evade capture by the Wolfpack, and seeking sanctuary in the island castle of Northpoint they gain another by ‘rescuing’ Valery’s new wife, although she has at first little desire to be rescued.

INFLUENCES — LORD OF THE RINGS vs LANKHMAR

There is still much to be admired in Hall’s new novel, such as the detail that she brings to her imagined world, and the likeability of her characters, and she has gained in the assurance of her writing since publishing Hierath, so that In Exile is a stronger novel than its predecessor. Like Hierath, In Exile is a much more human work than the template fantasies such as Lord of the Rings and perhaps owes more to classical American series such as Fritz Leiber’s Lankhmar.

But there are also a number of caveats.

First is the characters themselves — particularly Alex, the King and his wife Lydia who
behave at times in ways that simply don’t ring true of people in their position (they seem astonishingly content to leave their son in the care of others while riding around Hierath in a large group drawing attention to themselves; yet they are possessed by an enemy ruthless enough to wipe out whole communities).

The novel itself seems content to meander along in search of a plot, and really only begins to gain momentum as it gallops toward its conclusion in the court of Telesia.

In Exile is very much the middle volume of a trilogy and should be read as such — the
prelude to a strong conclusion.

After reading Heirath, the first book in this trilogy, you gain an expectation of horrible things happening to the main characters. All the way through you are on tenderhooks, waiting, rather impatiently, for it all to go wrong. And then it does and you realise how good a writer Joanne Hall is.

Lydia and Alex have found each other again and are on a journey to be reunited with their son, but Valery has other plans, and what he did gave me night terrors. In this book there is adventure and intrigue and at least three love triangles, but there is never a dull moment.

Here we also get to meet some of the Old Ones and we discover more about the history of the world. We are taken on a long journey through much of the New Kingdom and for once our hero has chosen to put his family before his people, which makes a refreshing change, it is only because of Valery’s actions that have put Alex in an impossible position that he is now being forced to act.