SHADOW HISTORIES OF THE RIVER KINGDOM by JULIET E MCKENNA

Buy Shadow Histories of the River Kingdom on Amazon 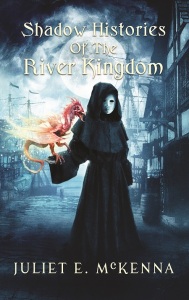 The River Kingdom, a landlocked realm where all trade passes up and down the rivers that carry the lifeblood of the kingdom. A place where, if you believe is something deeply enough, you can bring it from the shadow realms into the real world. A place where magic is rare, and guarded, and a secret cabal of magic users are pressed in defence of the kingdom from the kind of threat that should only exist in the imagination…

Shadow Histories of the River Kingdom is a collection of short stories and one novella, “The Ties That Bind”, which was previously serialised in Aethernet magazine. The River Kingdom is a new setting, very different from the world of the Lescari Revolution, and one where magic is kept secret from all but a select few.

The Ties that Bind closes the collection and is the longest story here, the tale of young widow Deyris and the return of a creature from upriver that wears the face of her late husband, a creature she must draw on powers she didn’t know she had to defeat. Other highlights in this very strong collection include Remembrance, a shorter, poignant story about how the power of grief can lend form to creatures from the unseen realm; A Warning Shiver, where the spiteful thoughts of desperate people bring forth horror, and The Legend of the Eagle, where a young goatherd must risk his life to restore hope to his village.

There are no lords or princes here, the stars of these stories are goat boys, elderly clerics, young women who have married into the merchant class, younger sons and former jockeys, the ordinary people who are really the ones who keep the world running and that Juliet McKenna understands and writes about with such great proficiency. This is an absorbing collection from one of the UK’s more under-rated fantasy writers, and I urge you to get your hands on a copy and have your eyes opened to a wider realm.